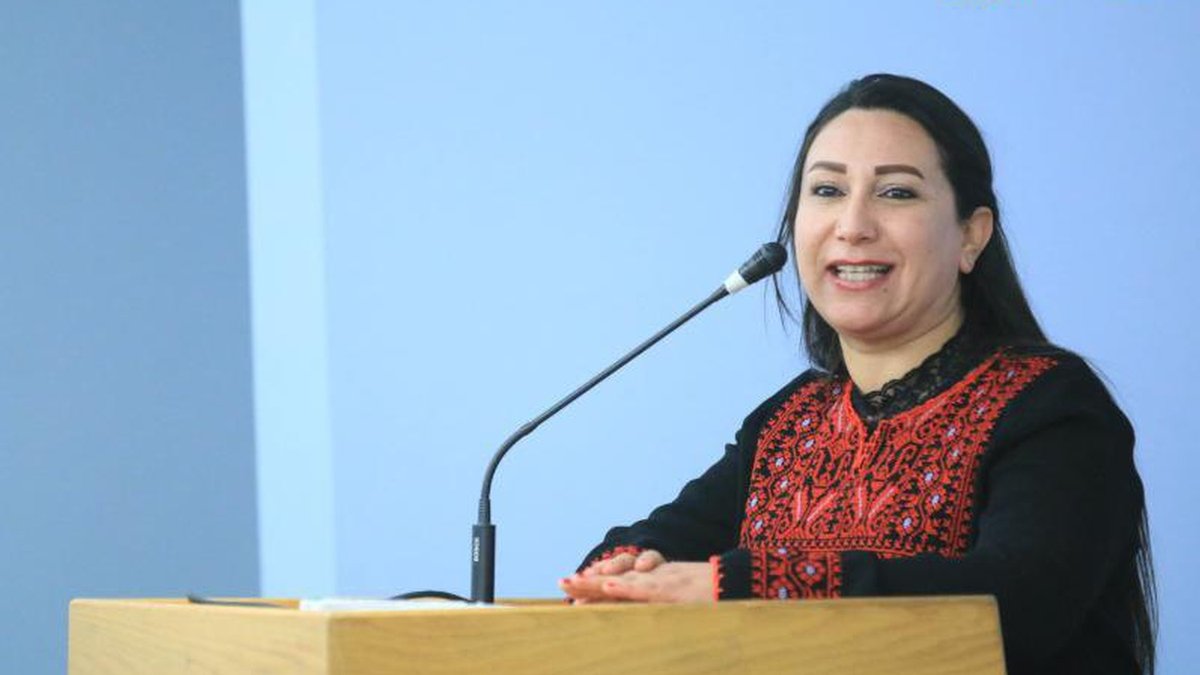 Women play an important role in the health system, both for themselves and on behalf of their children and family. A woman’s health status matters to herself, her family, and her community. If women’s needs are overlooked in their communities, however, states lose important opportunities to improve the health of residents and gain partners in creating a healthier society. Women are a key factor in maintaining healthy families.

From this perspective, Dr. Amira Shaheen, Assistant Professor of Epidemiology in the Faculty ‎of Medicine and Health Sciences at An-Najah National University, which is a research-intensive University focused on improving the quality of research in our regions and around the globe, has undertaken a research project (HERA) to enhance primary healthcare’s response to violence against women in Palestine.

Dr. Amira Shaheen is CHIFA Country Representative for Palestine and most recently has been named one of the researchers that have been awarded the 2019 OWSD-Elsevier Foundation Awards for Early-Career Women Scientists in the Developing World. Dr. Shaheen graduated with a PhD in Epidemiology from the London School of Hygiene and Tropical Medicine, UK in 2009.

Dr. Shaheen’s research interests are related to population health, ‎particularly to women’s health, child health, injuries, violence, ‎environmental health, and mental health. Her research has appeared in ‎many leading international journals including the Lancet, the International ‎Journal of Public Health, European Journal of Public Health, JAMA ‎Paediatric, PLoS One, and Archives of Suicide Research. ‎She also helps to facilitate the development and advancement of young ‎women in public health research careers as a mentor of young research ‎assistants. She is a member of her university’s research ethics committee, ‎and is also an active member of several scientific communities including ‎Child Healthcare Information for All and the International ‎Epidemiological Association.

HERA (Healthcare Responding to Violence and Abuse) is a cooperative project between An-Najah National University, University of São Paulo in Brazil, the London School of Hygiene and Tropical Medicine, and University of Bristol.

The project aims to understand how healthcare systems in Low and Middle Income Countries (LMIC) can integrate and evaluate interventions for violence against Women (VAW) that link with community organizations, and ultimately ensure better outcomes for women and children, engage a range of key stakeholders in intervention development and evaluation with a view to influencing policies and programs on VAW, and develop a global multi-disciplinary network of researchers and service providers who are committed to implementing and testing interventions for violence against women in health care settings to build research capacity and exchange knowledge.

The main objective of Dr. Amira's research through HERA1 is improving healthcare response to gender-based violence in Palestine.

What are the phases of HERA project in Palestine?

Dr. Shaheen noted that the project consists of three phases, including phase1 , which is the formative phase where the views of the women survivors of violence, healthcare providers and officials from organizations working on gender-based violence are collected, phase 2, which involves developing and implementing the intervention, and phase 3, which involves evaluating the intervention through exploring the views of the trainers, the women who were identified during the project, and the healthcare providers.

How it all started? How did you get involved in HERA?

Dr. Shaheen said that she was invited by a friend from the University of Bristol to join HERA project, co-led by the London School of Hygiene and Tropical Medicine, in response to a call for the UK Medical Research Council’s Global Research Challenges Foundation Award. Then, they started working on the proposal: "Healthcare Responding to Violence and Abuse".

She said: " The UK Medical Research Council (MRC) is a prestigious agency in the UK, and through this invitation, MRC aims to develop collaboration between universities in the UK and low income countries.

She added: "Together with ‎collaborators from Brazil, Nepal, Sri Lanka and the United Kingdom, we were ‎awarded a grant from the British National Institutes of Health Research (NIHR) to ‎enhance identification and referral of GBV cases in reproductive health ‎settings within marginalized Palestinian populations ‎, and the project began in 2018."

When I interviewed Dr. Shaheen, she talked in details about HERA1. She noted that the project lasted for three years from March 2016–March 2019. She said that HEAR1 included training of healthcare providers, and the establishment of a clear referral pathway. She added:" we trained healthcare providers on how to identify women survivors of violence and where to refer them. A case manager, usually a nurse, was identified in each clinic for identified cases to be referred to for further action according to different scenarios as well as to follow-up."

Outcomes and Impacts of HERA1 in Palestine

"In cooperation with the Palestinian Ministry of Health, we are working on improving the health care system response to ‎gender based violence (GBV) in Palestine. The project aims to improve women’s health overall through improving identification and referral of victims by ‎health care providers." Said Dr. Amira.

Dr. Shaheen pointed out that the project affects the Palestinian community indirectly in the field of healthcare services. She noted that after concluding HERA1, the project increased the identification and referral of survivors of violence within the clinic, but also identified a need for improved ongoing support for the safety and psychological health of survivors. She added": Healthcare providers' knowledge on how to identify women survivors of violence and where to refer them for further action was enhanced through the training they got during the project."

"During HERA1, I noticed that women exposed to violence need psychological support, and healthcare providers lack psychological skills and principles. Based on that, we started addressing this issue in HEAR2." Dr. Amira explained.

Dr. Shaheen mentioned that HERA2 like other research projects around the world, has stopped due to COVID-19 pandemic. She said: “We were supposed to start the training in March six months ago but we could not do it because of the current circumstances and the uncertainly surrounding the coronavirus outbreak (Covid-19), and hopefully, we will start the training the next month in different setting where the percentage of violence is not high.”

Are the outcomes of HERA1 different from HERA2 outcomes?

“Actually, the outcomes are almost the same but in HERA2, we will affect and help the community in a different way; a way that grantees that women exposed to violence are going to be supported psychologically. They will get the required psychological support. In HERA1, we focused on training the healthcare providers on identifying the violence cases.” Dr. Shaheen said.

She also pointed out that psychological violence is the most common type of abuse detected in the world and Palestine, and nearly one in three women experience psychological, physical, sexual, social or economic violence by their husband, according to data from the World Health Organization.

She added: "Violence against women can cause physical and mental health problems as one of the adverse effects of violence against women is an increased likelihood of depression, which can eventually lead to suicidal ideation or suicide attempts. Also, In HERA 2, we are focusing on reducing the mental health consequences of violence on women by offering them the required psychological support in addition to the healthcare services they need inside the clinic.”

What are the types of target clinics?

Dr. Shaheen answered:" We are mainly targeting the primary healthcare clinics. In HERA2, we will expand into reproductive health service (RHS) settings, including within primary care clinics and outpatient gynecology settings as well as MCH and pregnancy clinics." Dr. Amira answered

What were the barriers to battered women disclosing VAW to health care providers?

Dr. Shaheen stated that most of the battered women were too frightened to disclose the abuse they were experiencing. They encountered different barriers to talking to health care providers about their experiences. For example, lack of personal privacy in health care consultations, and lack of trust in confidentiality were major barriers to disclosure for the women, who were often in panic when the found out that the health care provider is from the same area that they are living in. Furthermore, women’s fear of being stigmatized for their actions was a strong barrier to disclosure. They described their fear of the stigma of being a ‘home-wrecker’, and of being ostracized by society for speaking out against their husband.

She also said:"After HERA1, we communicated with the Palestinian MOH and they were very cooperative with us with regard to this issue. The MOH helps us get healthcare providers who are not from the same area of the battered women to help them feel free to disclose the abuse they are experiencing. They prefer someone who is unknown to them." Dr. Amira commented.

Is there a comprehensive law in Palestine that protects women against violence?

Dr. Shaheen answered: "We do not have the “Family Protection law”. A draft Palestinian penal code is currently being deliberated with a broad range of actors, but has not yet been approved. Actually, the “Family Protection law” is a comprehensive law criminalizing violence against women, including domestic violence, sexual violence and human trafficking, has been submitted to the Council of Ministers by the Ministry of Women’s Affairs, as part of an initiative taken by a number of women’s rights and human rights organizations."

In 2019, Dr. Shaheen, obtained the outstanding OWSD-Elsevier Foundation Award from the ‎Organization for Women in Science for the Developing World (OWSD), ‎which makes her the first Palestinian woman to receive this award among ‎five researchers from developing countries.

Dr. Shaheen said: " The award acknowledges the scientists' commitment to leading and ‎mentoring young scientists, and to improving lives and livelihoods in ‎their communities and regions, and is presented to women scientists who ‎have performed ground-breaking international-level science, often in ‎circumstances where the deck has been stacked against them."

Dr. Shaheen invited interested women to join the OWSD Palestine National Chapter (OWAS-Palestine National Chapter) as it provides research training and networking opportunities for women scientists throughout the developing world at different stages in their careers. She emphasized on the importance of the findings of research studies about public health. She said" Conducting research studies about public health will be of benefit to violence against women and health systems researchers worldwide. It will also be of benefit to health policy makers and health care practitioners who want to develop a health care response to violence against women in Palestine."

She also thanked An-Najah for its continuous support, expressing her interest in conducting further research studies in public health to improve women’s health through targeting GBV and its health impact, and through increasing the health system response to GBV.