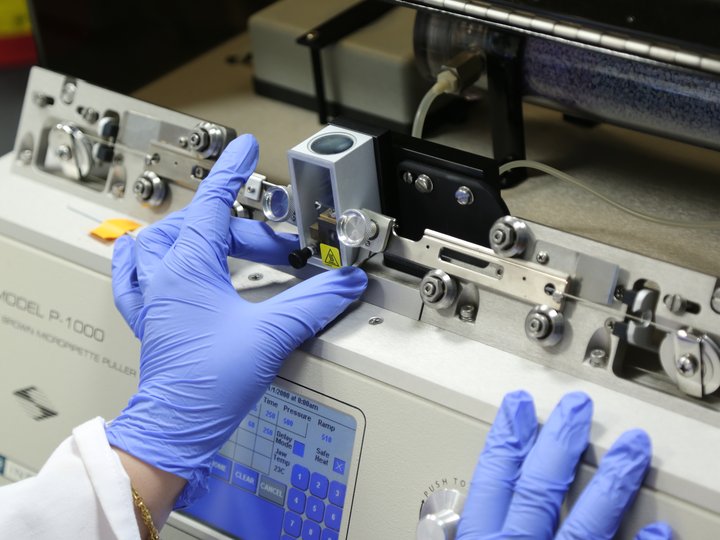 The Neuroscience Research Centers on Glutamate Ion Channel Receptors (iGluRs). These receptors mediate synaptic neurotransmission and are indispensable in brain activity, such as ‎memory and learning. Upon binding to glutamate, the glutamate receptor rapidly ‎changes its conformation and opens its ion channel pore to allow small cations such as ‎sodium ions to flow across the cellular membrane, transmitting an electrical signal ‎between neurons. Moreover, research will concern the membrane proteins on the cell ‎surface. The activity of virtually every cell is regulated by extracellular signals, such as ‎neurotransmitters, hormones, and sensory stimuli. These signals are transmitted into the ‎cell interior via membrane receptor proteins. Understanding how these membrane proteins mediate signal transmission and transduction is the primary research interest in the neuroscience laboratory. We are particularly interested in the structure and function relationship, the kinetic and molecular mechanism of protein function by protein-protein and protein-drug interactions. We also attempt to develop better inhibitor/potentiators to regulate ‎membrane protein functions. In the long term, we hope that our research will provide ‎not only insight into the mechanisms of action of these molecular machines but also ‎clues for the design of molecular devices, which can be used (i) for studying signal ‎transduction pathways and (ii) as diagnostic/detection tools for disease treatment. We ‎use an interdisciplinary approach in our research, including rapid kinetic techniques ‎suitable for membrane proteins, biochemical and biophysical chemistry, molecular ‎biology, electrophysiology, and neuroscience.‎ 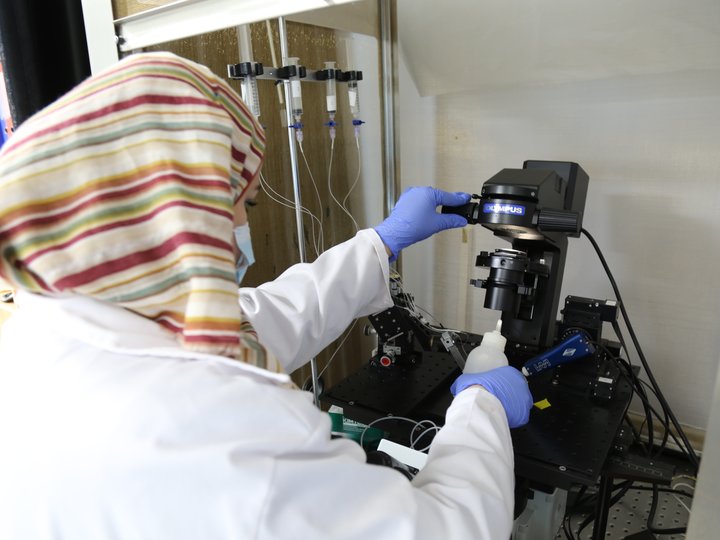 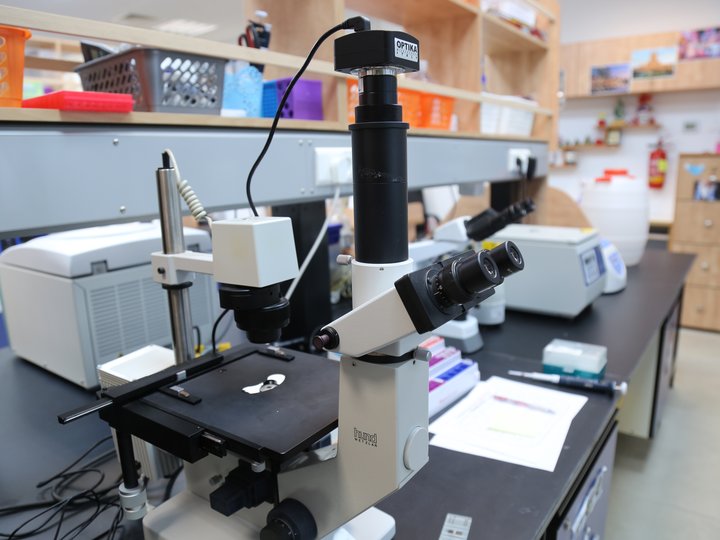 The aim is to translate findings into clinical trials that make a difference in the lives of patients (from bench to bedside) as we work in tandem with academic and industry colleagues. 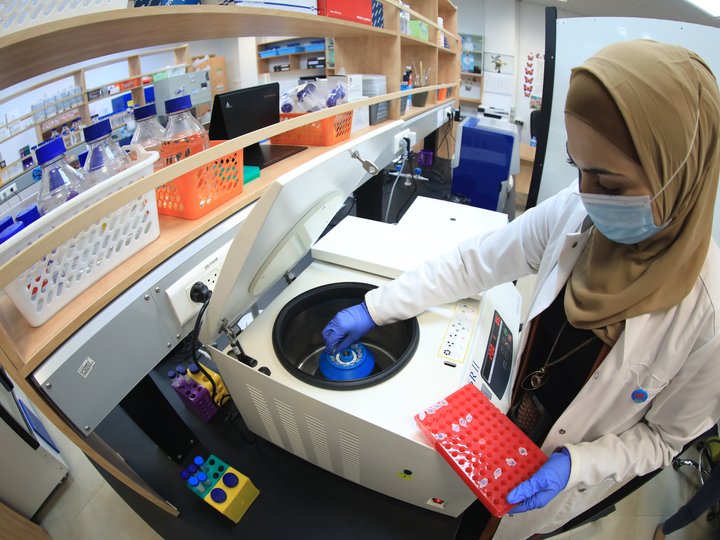 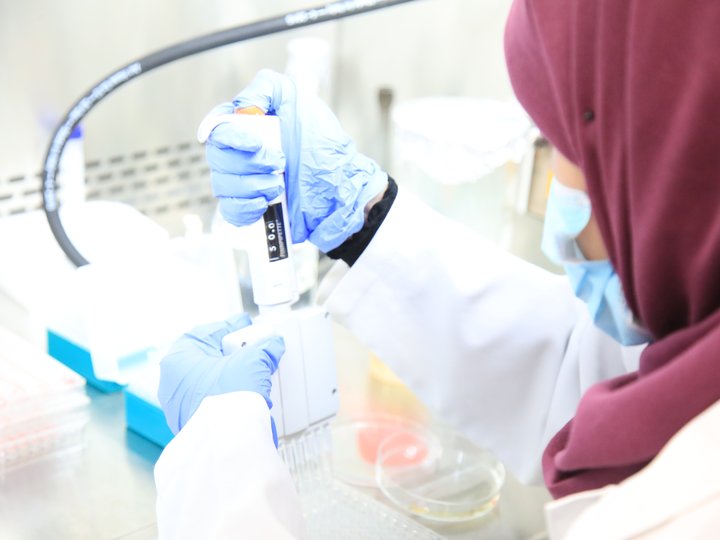 The Microbiology Lab  allows students to isolate culture and identify many of pathological bacteria from different sites in addition to some pathological fungi. Moreover, students learn to do many immunological tests that diagnose some immunological diseases. 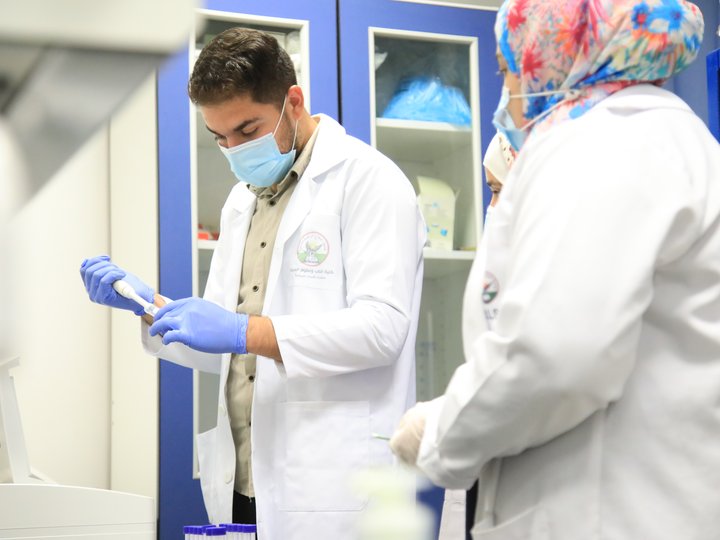 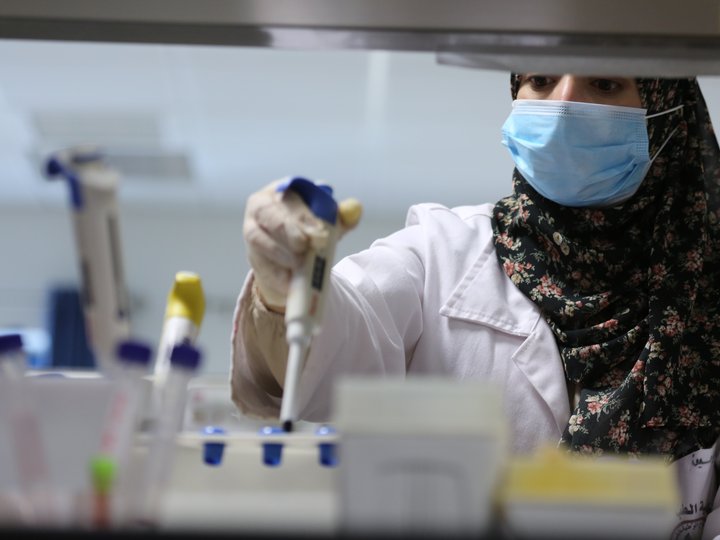 In the Clinical Biochemistry Lab, the students learn how to test the body chemistry such as measuring blood glucose level, urea level, lipid profile, and enzymatic level in order to understand the metabolic reactions that occur inside the body cells. 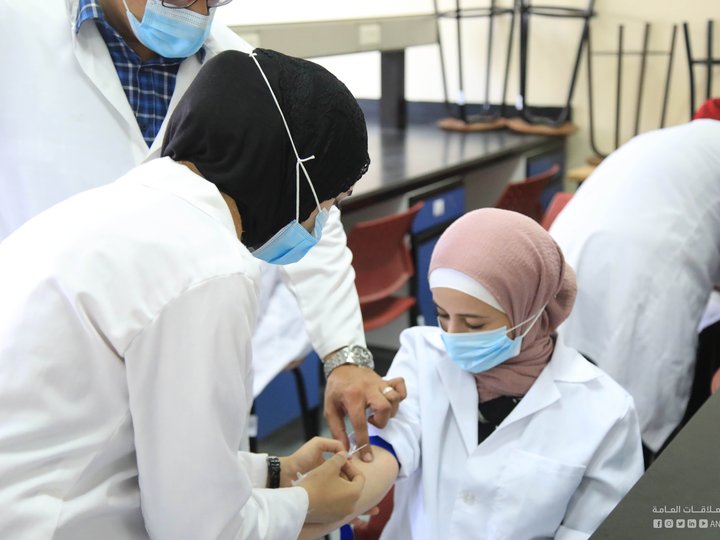 The Laboratory of Physiology serves students of medicine and pharmacy in their second year. It aims through its practical course material to strengthen the relationship between theory and applied materials in physiology. In order to achieve that, this laboratory has provided many of the instruments and tools that enrich the learning process and increase the capabilities of students to conduct practical physiological experiments. Blood pressure manometer, electrocardiogram, spirometer, glucometer and centrifuge are some of these tools and instruments. 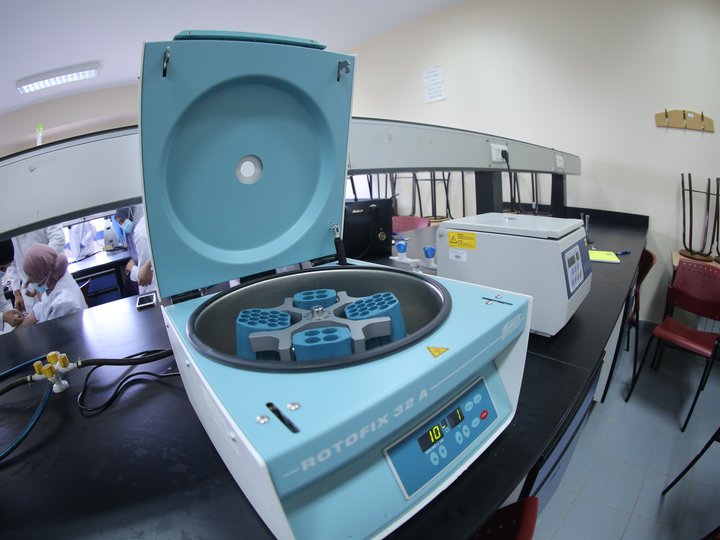 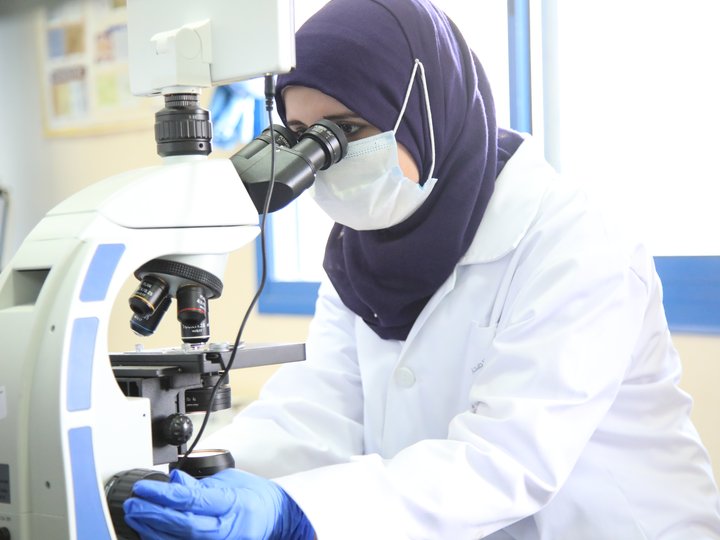 In the Pathology Lab, the students learn how to diagnose different body tissues from real body organs and learn how to take a biopsy and test it under the microscope in order to see different histological diseases. 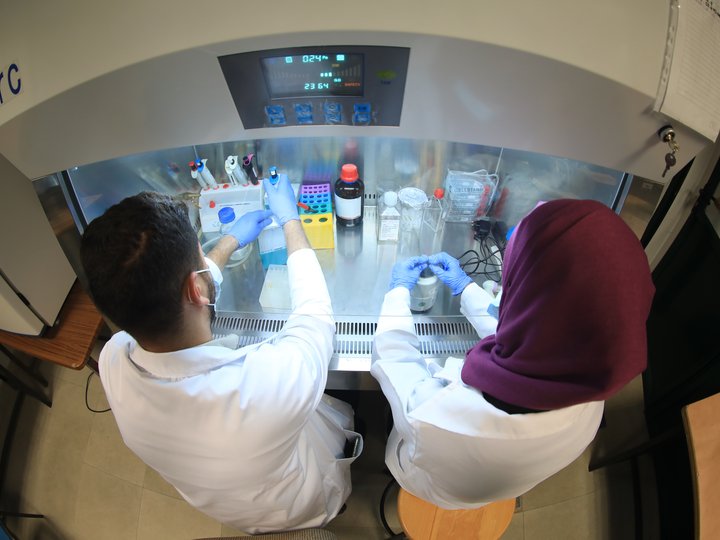 The recent progresses on the research field of biomedical sciences and its different areas necessitates providing the infrastructure and services needed to keep pace with the advances in the different scientific disciplines. To achieve that, An-Najah National University offers its medical students at the Faculty of Medicine and Health Sciences the central research laboratory, which is well-prepared and equipped with the latest tools and devices needed for the scientific research.

The central research laboratory consists of the following labs:

First: Genetic Research and Cell Transplant Lab : It aims to carry out research regarding genetics, molecular biochemistry, and cell transplant in terms of: 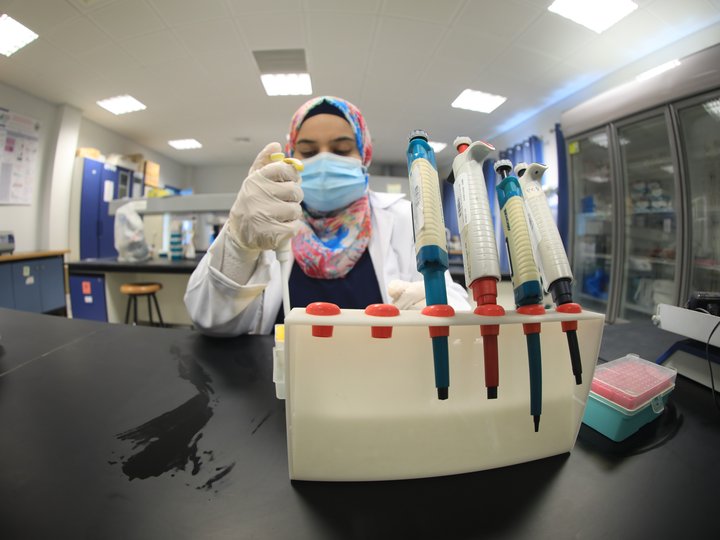 Second: Microbiology and Physiology research lab: It is concerned with the following:

2. Research on Physiology:  the laboratory is equipped with many devices specialized in studying the functions of the different human body organs in terms of: 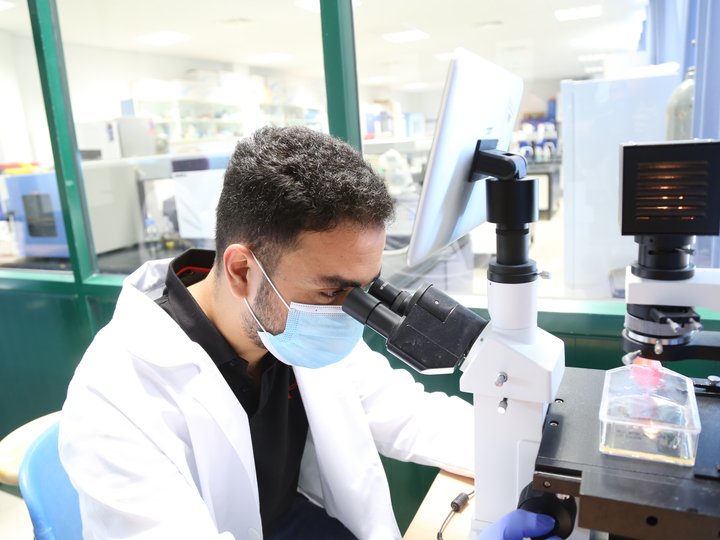 The anatomy laboratory is used to teach various anatomy courses, such as anatomy of the thorax, abdomen and pelvis, anatomy of the back and limbs, and anatomy of the head and neck in addition to the embryology course. The laboratory provides students with plastic models of various body organs, skeletons, muscles, and cross-sections of different areas of the human body. Moreover, the laboratory could also be used to dissect some animal organs that are similar to human body organs and present them to students in order to further enhance the educational process. 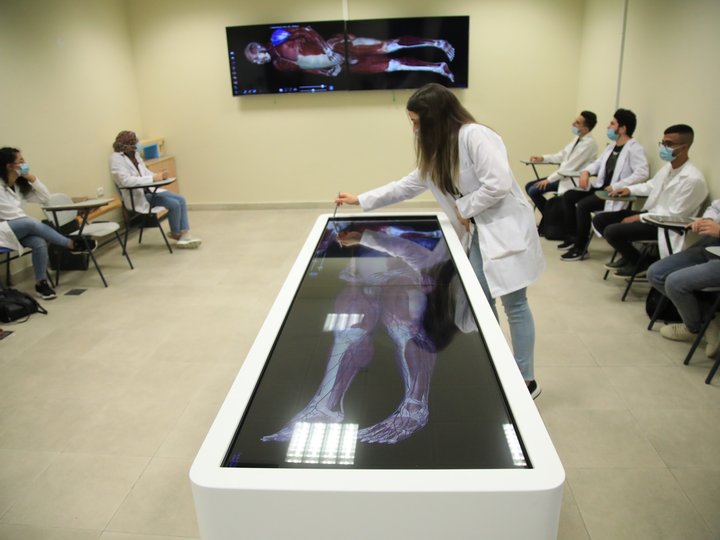 In an interactive 3D image, the device displays: 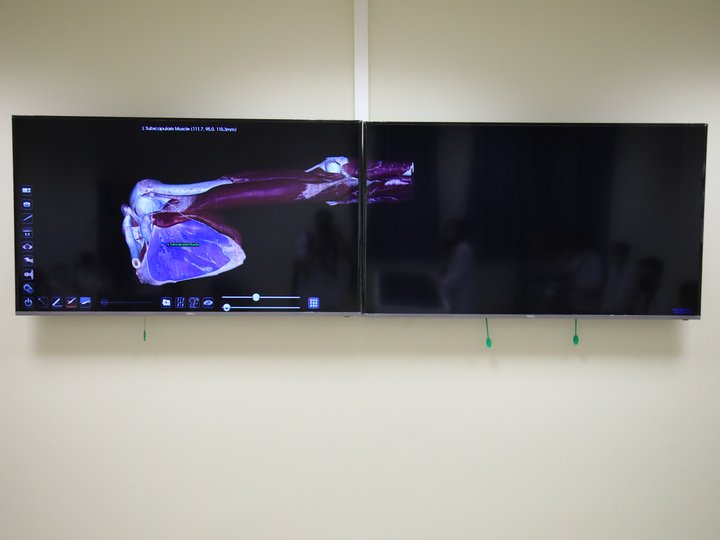 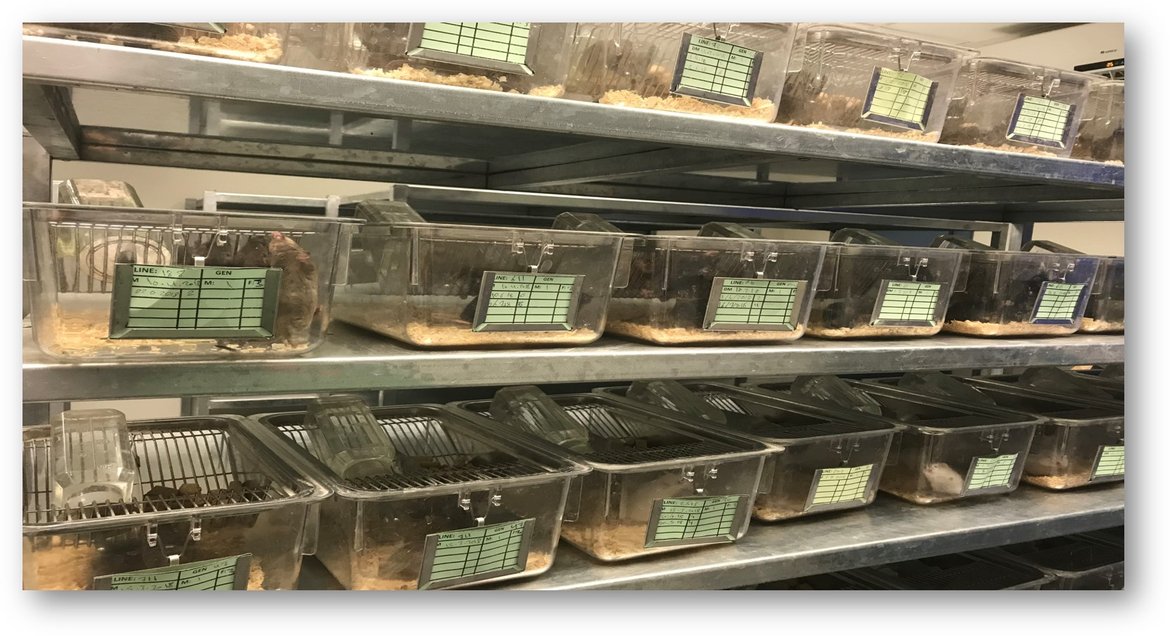 The animal lab is a service unit.  It was established in 2016 with the primary mission to breed specific laboratory animals free of pathogens for research and education purposes, mainly for the faculty of medicine and health sciences, although animals are also provided for other departments and units of the university. The lab also provides advice on matters related to laboratory animal science.

The lab is divided into three main parts: