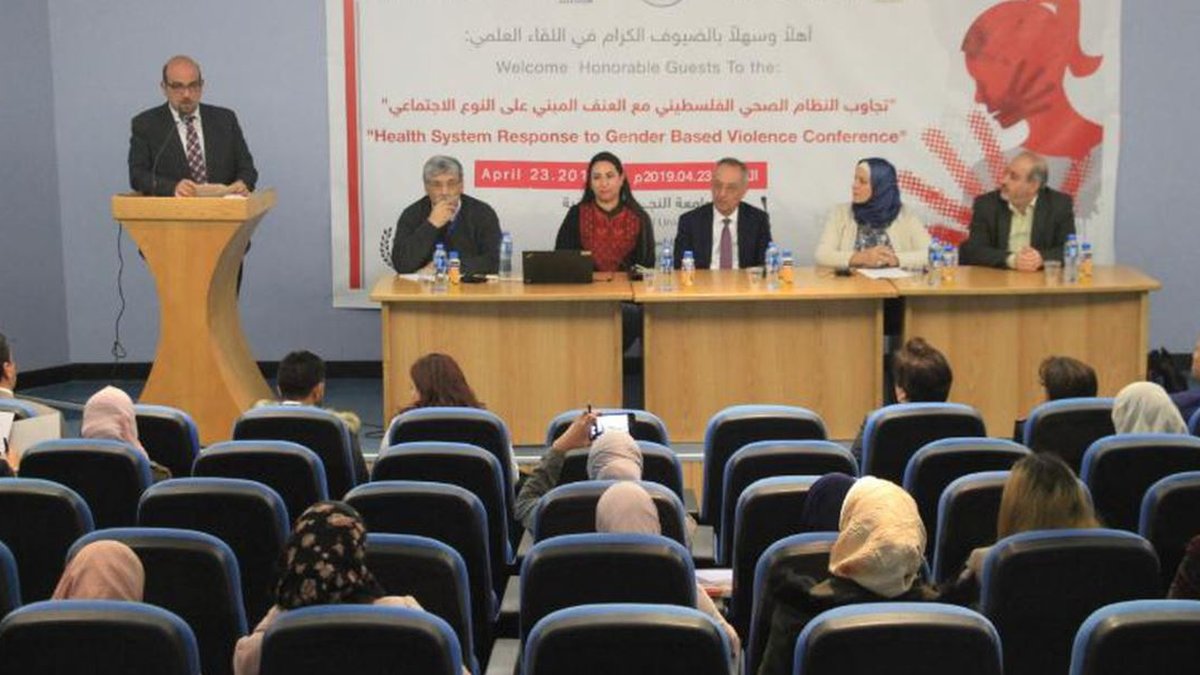 The Faculty of Medicine and Health Sciences at An-Najah in cooperation with Women Health and Primary Health Care units at the Ministry of Health and Juzoor for Health and Social Development held the Palestinian health system response to gender-based violence meeting in the New Campus.

In the opening speech, Professor Maher Natsheh, Acting President of An-Najah mentioned that the University encourages scientific research as it produces 450 research papers annually, 300 of which are published by prominent international journals. This contributes to upgrading the University in international rankings, most recent of which is the Times ranking.

He also mentioned that An-Najah is among top 300 world universities to fulfill gender requirements and stressed the importance of demolishing gender-based violence.

Dr. Amira Shaheen, meeting senior scholar and staff member at the Faculty of Medicine said that the meeting idea sprung from multi-collaboration to confront gender-based violence. She also referred to Palestinian health system response to confront this social disease which resulted in HERA1 project clarifying that HERA2 is to be launched.

Dr. Maha Awad, Director of Women Health Unit talked about the unit's role as a partner of HERA whereas Dr. Umaiyeh Khammash, Juzoor Director paid tribute to the special relationship Juzoor has with An-Najah.

The meeting aimed at reinforcing health care primary response to domestic violence in Palestine and starting the intervention process which includes training of service providers, offering referral centers for women who seek help and conducting qualitative research on barriers and facilitators regarding health care response to violence against women. It also aimed at developing an intervention system in line with the culture of two primary health care clinics and beginning to implement the feasibility test and measure intervention consent.

The meeting resulted in a number of recommendations, most important of which are intensification of the joint work of all academic, health, educational, security and legal institutions to work in the field of gender-based violence, studying and facilitating the factors that hinder the identification of abused women and the factors hindering their support and standardizing the designations used in gender-based violence.

The meeting was also attended by Dr. Abdulsalam Khayyat, one of the event organizers and Teaching Assistant at An-Najah.